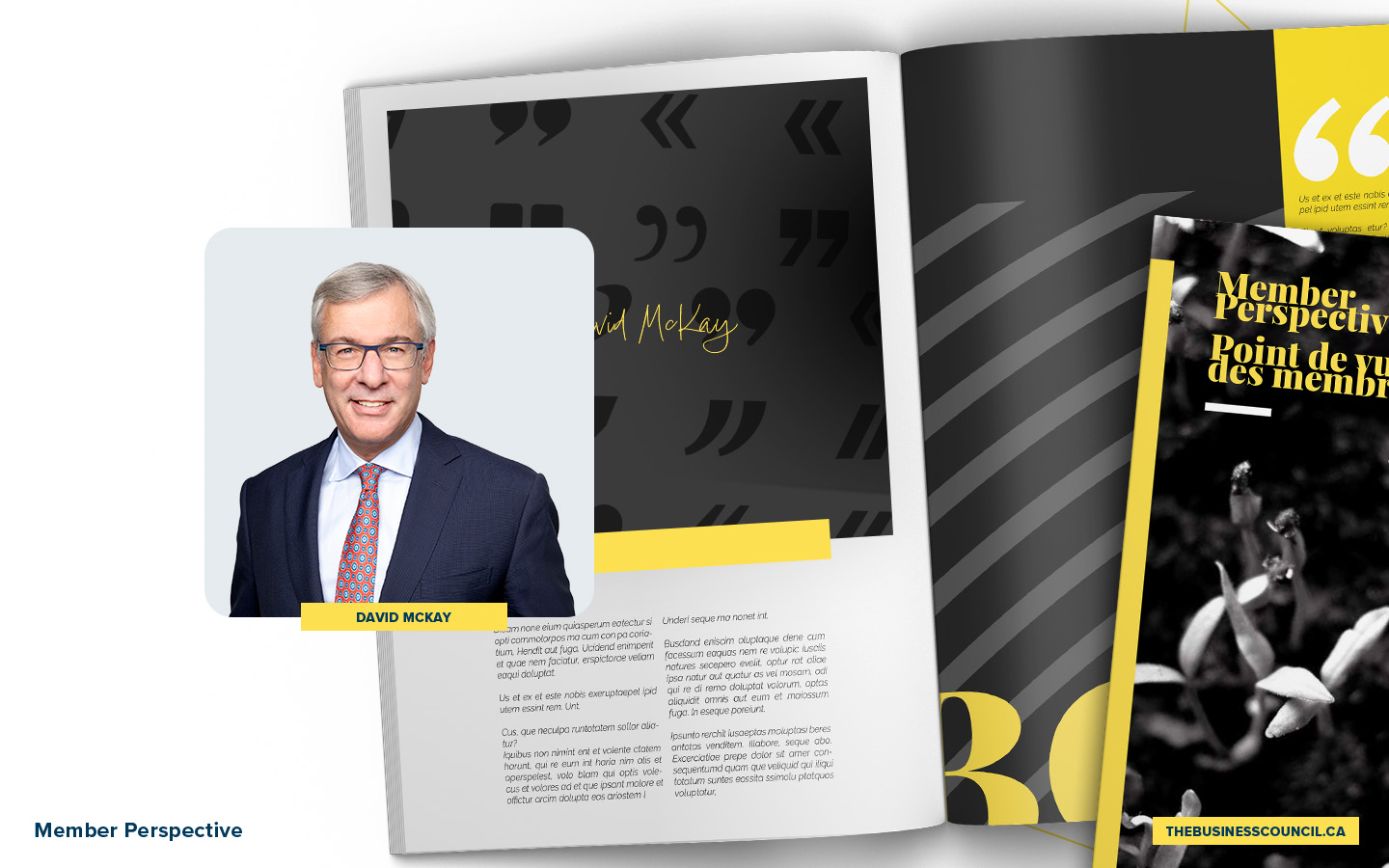 As published by David I. McKay on RBC’s Thought Leadership page

I’ve been to Davos five times, and don’t miss the icy sidewalks and endless security lines. But when the World Economic Forum last week brought together government leaders, CEOs, community activists and scientists for a digital Davos, I did miss the informal conversations and was reminded why connectivity is so important.

Like the old movie title says, being there matters. The hallway conversations, the opportunity to read a room, the chance encounters—these are the real strengths of Davos, just as they are the real strengths of our offices, labs and schools. It’s why we’re all yearning to be back together as soon as it’s safe, even if it means having to navigate the odd icy sidewalk.

This year’s virtual Davos tried to address the challenges shaping 2021: the race to vaccinate the world, the effort to kick-start economies, the fight to flatten the climate curve, the long journey to racial justice, and the struggle to detox social media. Here’s some of what I took away:

1 – Vaccine politics could prolong the pandemic

Vaccine nationalism may be the biggest challenge to our world right now. We will get through it, but the next few months could be politically bumpy. Germany, a leader, has vaccinated less than 5% of its population, and made clear it’s going to take care of its own population first. Other wealthy countries are struggling to get supplies, while the world’s poorest countries worry they will be shut out. And that puts everyone at some risk, as the more the virus circulates, the greater the risk of mutation. There are concerns of a “persistent pandemic,” but vaccine distribution is just one piece of the puzzle. Public health systems need to be strengthened in the poorest countries. The World Health Organization needs to be revised and reformed, too, as it’s the only body that can help us all understand the virus and how we can contain it, collectively. The politics of the pandemic are not likely to ease up.

China’s Xi Jinping helped kick off the week with a stern message to the new U.S. president and his allies. Any effort to insert values into trade could lead to a new Cold War. We may be headed that way anyway. As Biden pushes for an “an alliance of democracies,” Canada and the European Union will try to revive global trade in a new fashion that’s as much about values as it is about value. As German Chancellor Angela Merkel put it, multilateralism “doesn’t simply mean co-existence.” While we may see a revived World Trade Organization, it’s not likely to be an all-powerful body. Expect more regional trade blocs, and what Spain’s foreign minister called an age of “strategic autonomy.” Ironically, this effort to “re-globalize” misses the digital revolution that transcends borders. The Europeans, Australians and others may want more control over the cloud-based economy that’s thriving in the pandemic. But they’ll need to convince Biden they’re not out to stifle Silicon Valley and the platforms that Washington is happy to criticize at home, and defend abroad.

3 – Get ready for smart supply chains

The regionalization of trade is leading to a rethinking of supply chains, and not just because of vaccine and PPE shortages. Countries are looking at strategic sectors, especially ones rooted in technology, to balance supply and demand more safely. As Canada is discovering the hard way—through vaccines—this may lead to trade-offs between efficiency and resilience. National security may come into play, too, as we witness the growing connectedness of every tool and appliance in our lives. Regions everywhere will want more control over the Internet of Things, just as they do the Internet of words, pictures and money. That means that, as we rebuild supply chains, we’ll need to put an even greater premium on R&D, to ensure manufacturing centres are integrated with innovation centres. Brawn and brain, in other words. Masayoshi Son, the Japanese investor behind SoftBank, believes this approach may fuel the next big disruption, in logistics and mobility. He thinks autonomous vehicles can be to the 2020s what smartphones were to the 2010s. We’ll see. But in the decades ahead, auto plants are likely to depend on artificial intelligence and cybersecurity as much as steel and aluminum. Based on patent data, Son is convinced only two countries—the U.S. and China—will dominate this new space race, and they’ll be central to the smart supply chains of tomorrow.

4 – Climate change, the next catalyst of innovation

Mary Barra came to our virtual session with a plan. The General Motors CEO laid out her vision for a company focused on “Zero Crashes, Zero Emissions, Zero Congestion.” She’s trying to make GM climate-friendly, as she watches Elon Musk’s taillights on the electric highway. But the GM plan to be all-EV is as much about innovation as emissions. Entire sectors will emerge—or be remade—through the 2020s as consumers look for technology to transform their lives, and governments spend trillions to lay the groundwork of a new economy. BlackRock founder Larry Fink, a Davos regular, published his annual letter during the Forum, urging CEOs to see the climate transition as an opportunity not just for the climate. He figures the world will need $50 trillion more in new investment by 2050 to meet our sustainability goals. That’s already leading to plans for a Hydrogen Valley in Europe (to do for energy what Silicon Valley does for computing) and proposals for new power grids along the U.S. interstate network. As Bill Gates told the Forum, the biggest cuts in emissions this decade will come from technology, not changes in behaviour. His new word for climate change: “catalytic.”

5 – Increasing trust is the challenge of post-COVID capitalism

Davos is the birthplace of “stakeholder capitalism”: the idea that, to thrive in the long term, business needs to balance returns to shareholders with returns to customers, employees and communities. This mindset led many companies in the depths of the pandemic to find ways to make and distribute emergency supplies and develop vaccines at breakneck speeds. In North America, corporations were also among the first to step up to the challenges of Black Lives Matter, changing employment and procurement practices while many governments were still talking. It’s one reason the latest Edelman Trust Barometer (a survey of 33,000 people globally) found business is now the most trusted institution—ahead of government, media and religious organizations—and the only institution seen as both ethical and competent. That’s not necessarily comforting. Trust in all institutions is important to the well-functioning of markets and an economy, as well as society. Coming out of the crisis, business will need to do more to help those institutions strengthen themselves, if a new kind of stakeholder capitalism is to endure.

6 – Money’s cheap; judgement is not

The COVID crisis has created a new generation of fans for John Maynard Keynes, and his theories about government spending. Can it do the same for another legendary economist from the 1930s, Joseph Schumpeter, and his belief in creative destruction? Governments and business may soon need to come to grips with the lasting economic damage of the crisis and consider which sectors stand a chance of rebirth, and which don’t. The stock market rewards companies at the forefront of change. But it may be politically tougher for governments to do the same. That’s too bad, as they can reap the reward if their countries become transformation leaders. In 2020, many of those governments got by throwing money at the entire economy. In 2021, they’ll need to be more selective—and appreciate how low interest rates can be a rising tide even for leaky boats. François Villeroy de Galhau, governor of France’s central bank, expressed concern his fellow policymakers focus too much on liquidity and not enough on solvency. Kewsong Lee, the CEO of Carlyle, was less diplomatic, asking policymakers if they’re keeping “zombie companies” alive. David Solomon, the CEO of Goldman Sachs, argued markets tend to eventually separate the good from the bad and the ugly. It will take discipline from governments to know when to let the Schumpeterian forces prevail.

Our virtual gathering was haunted by the January 6 attack on Capitol Hill, and what it exposed in social media and democracy. The heads of major tech companies assured us they were ahead of the mob on most counts. Susan Wojcicki, YouTube’s CEO, explained how her platform is using AI and bots to take down thousands of misleading or offensive videos every day, usually before more than a handful of people have seen them. YouTube’s owner, Google, just opened a second “safety engineering” centre, to add more human surveillance. The platforms are rightly concerned about stifling free speech, especially in a pandemic when so much needs to be expressed and shared. But as many media and advertising executives pointed out, it’s not just speech that’s the problem; it’s reach. The platforms use algorithms to amplify the reach of different types of content, and most of us don’t know how they work. Governments may need to lean in more, to examine those algorithms, regulate harmful speech, and hold tech companies to account for allowing abuses to propagate. “Responsible conduct” can be a new norm for tech, as it is for other companies that rely on the public good. More public vigilance will be needed, too. As we confront the next stage of a pandemic, and its aftermath, our collective success may just hinge on the most important word of the 2020s: trust.