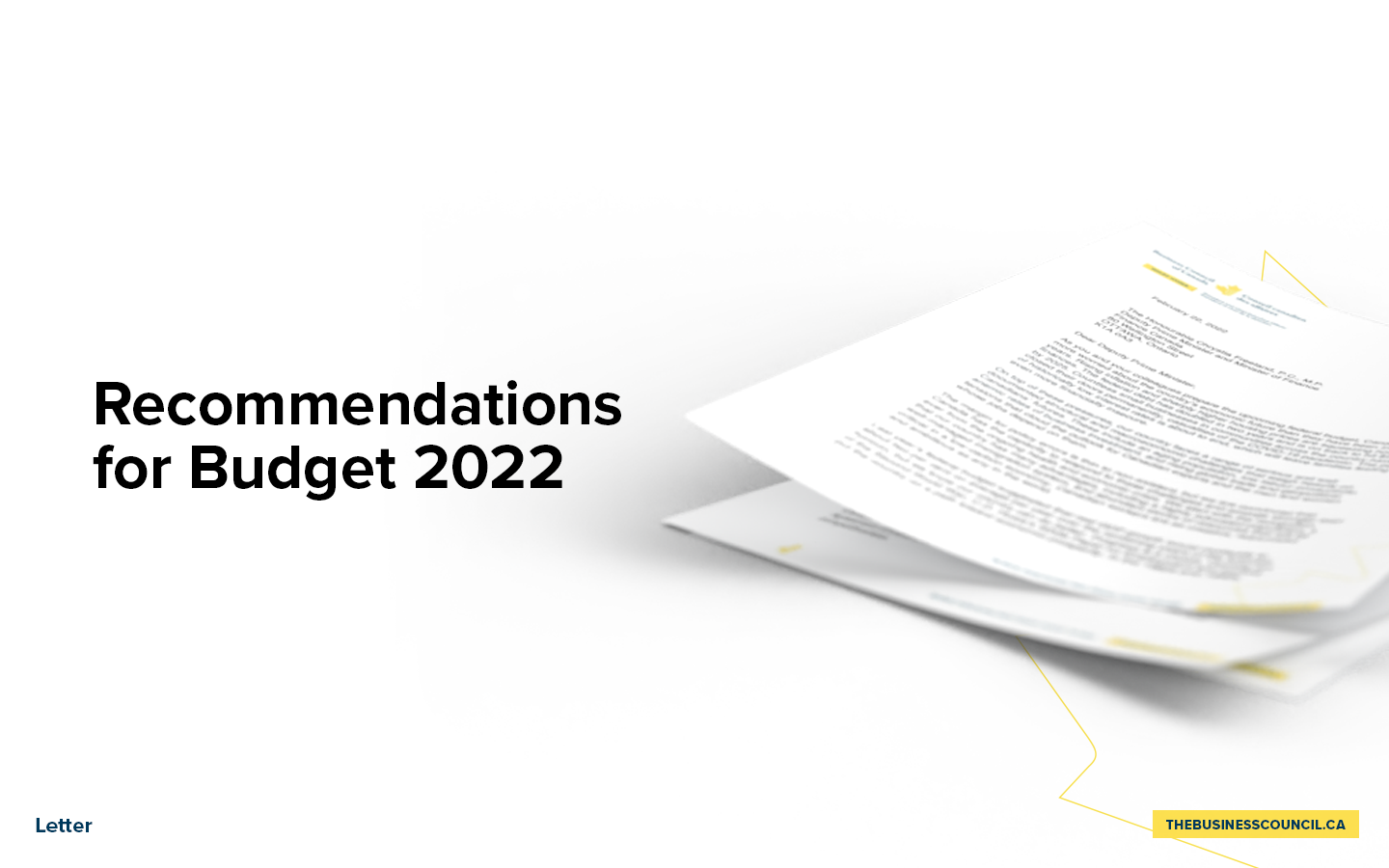 This letter was sent to the Honourable Chrystia Freeland, Deputy Prime Minister and Minister of Finance, in advance of the 2022 federal budget.

As you and your colleagues prepare the upcoming federal budget, Canadians are more worried about the country’s economic future than they have been in many years. Rising inflation and sharply higher housing prices are squeezing household finances. The federal debt has doubled in two years and is on track to hit $2 trillion by 2025. Countless small businesses in communities across the country have closed their doors permanently, casualties of the COVID-19 pandemic. The period of historically low interest rates is about to end, which will leave families feeling even more financially insecure.

On top of these pressures, our country faces a range of serious and well documented structural and macroeconomic challenges that weigh heavily on Canadians’ futures. These include an aging population, low labour productivity, anemic rates of business investment, and rising global trade and geopolitical tensions that cloud the outlook for Canadian exports and the men and women whose jobs depend on them.

The margin for policy errors is thin to non-existent, but we are convinced that Canada has the capacity to respond to these challenges and emerge stronger than ever from the ongoing health and economic crisis. We start with the recognition that our country has many advantages, including a highly educated population, a well-managed immigration system, and abundant stores of resources that will be critical in a low-carbon economy. Canadian workers are as creative, resourceful and ambitious as any in the world.

Last year’s federal budget suggested that real GDP growth would moderate to about two per cent on average per year over the remaining years of the forecast horizon, but we know our country can do better. Progress is a choice. Coming out of the Second World War, C.D. Howe’s White Paper on Employment and Income put the country on a path toward economic prosperity. In the 1980s and 1990s, Canada’s “leap of faith” in embracing North American free trade similarly raised living standards, boosted exports, and created new opportunities for Canadian workers. Both policy frameworks were ambitious and focussed on the long term.

In November 2020, in a paper titled Powering A Strong Recovery, we argued that a credible plan for post-pandemic economic growth requires a focus on three main pillars: people, capital and ideas. We have since proposed policy solutions in each of those areas, including re-skilling programs that are business-led and results-driven, the creation of an advanced research projects agency, and expanding the Global Talent Stream for high-skilled immigrants. We have been consistent on the importance of regulatory predictability to boost business investments, and on the fact that a credible growth strategy needs clear, measurable outcomes over time.

As the Omicron wave subsides and the economy once again opens up, Canadians are looking to their government for hope and direction. When you introduced the Fall Economic and Fiscal Update in December, you said that Canada’s focus as we emerge from the pandemic must be on competitiveness and growth, and that measures to promote both would figure prominently in the budget. We could not agree more. On the following pages, we offer five recommendations that we believe would spur long-term growth and ensure a better future for all Canadians.

As Bank of Canada Governor Tiff Macklem has noted, business investment through the pandemic has been considerably stronger in the United States than in Canada. The central bank’s most recent Business Outlook Survey contained a glimmer of hope on this score. Sixty-two per cent of firms said they plan to spend more on machinery and equipment in the year ahead than they did last year—the highest reading since 1999.

For investors and businesses to follow through on those intentions, they must have confidence in Canada’s long-term economic prospects. Many factors influence business confidence, but overall assessments of tax competitiveness and the regulatory environment are among the most important. To repeat what we said last year, now is not the time for tax increases that discourage job-creation and investment. Instead, the government should signal its commitment to tax competitiveness by launching a comprehensive review of the tax system aimed at simplifying the tax code, driving innovation, and reducing compliance burdens.

The government must also be sensitive to the risk that rising U.S. protectionism will deter or disadvantage investments in Canada by companies that need efficient access to customers on the other side of the border. Budget 2022 can send a powerful signal about the strength of the Canada-U.S. relationship by reaffirming Canada’s commitment to the Roadmap for a Renewed U.S.-Canada Partnership. Priorities include moving forward with the Canada-U.S. Critical Minerals Action Plan, strengthening supply chains to enhance security and resiliency, and cooperating on all aspects of battery development and production. Similarly, Canada should champion full implementation of the Canada-United States-Mexico Agreement (CUSMA) as a key enabler of North American economic progress and competitiveness.

The number of job vacancies in the country is near an all-time high. Employers in industries as varied as information technology, construction, and agriculture are struggling to find skilled workers. Your government’s commitment to promoting high-quality, affordable child care will help boost labour market participation, but more must be done to expand and increase the quality of Canada’s labour force. The last budget included significant investments in re-skilling, including an initiative to scale-up proven industry-led, third-party-delivered approaches to help displaced workers seize new opportunities in expanding sectors. Such public-private partnerships are the best way to ensure employers have the talent they need to grow.

To improve Canada’s innovative capacity, our country must develop a more robust pipeline of workers with skills in science, technology, engineering, and mathematics (STEM). Canada’s immigration system has long been a source of highly educated and talented newcomers, simultaneously benefiting the country’s labour market and innovation ecosystem. To better attract and retain international STEM talent, the government should enhance the Global Talent Stream to further expedite the entry of highly skilled workers. The government should also establish a new, accelerated pathway to permanent residency to ensure that workers brought in under the Global Talent Stream settle permanently. Between the program’s launch in June 2017 and August 2020, only 11 per cent of first-time work permit holders applied for permanent residency. This is a missed opportunity to attract and retain a larger share of the world’s best minds.

3. Develop an industrial strategy with a focus on innovation

A succession of reports in recent years have provided sound recommendations to increase Canada’s productive capacity and reinforce the “supply side” over the longer term. Government-appointed advisory groups chaired by Dominic Barton and Monique Leroux recommended developing industrial strategies in fast-rising sectors such as clean tech, ag-tech, and biotech. Those are key sectors in which Canada can gain a competitive advantage with the right public-private partnerships at scale.

“Made in China 2025”, “Made in Germany 2030” and the United States’ “Build Back Better” initiatives are powerful examples of the kind of intentional policy frameworks our competitors are putting in place to drive long-term growth. The high level of bipartisan support in Washington for greater public investments in science and technology in general, and in industrial research in particular, reflects a shared understanding of the modern economic imperative: countries that nurture and then fully capitalize on their intellectual capital will be the ones that succeed in the 21st-century economy.

The clean energy transition of the global economy is well underway, and Canada is uniquely positioned to contribute to and benefit from this transformation.   As we outlined in a document we released on February 18 entitled Immediate Priorities for Canada’s 2030 Emissions Reduction Plan, acting swiftly on four immediate and high-impact priorities would build on the country’s existing strengths – in resource endowments, capital availability, infrastructure, and skills – and maximize Canadians’ chances of achieving our climate objectives. Moving aggressively in these areas is critical to achieving the ambitious GHG reduction goal which the government has set for 2030, now only eight years away. In addition, these four priorities offer the greatest potential to unlock large pools of private capital in support of Canada’s low-carbon future:

Allow us to expand on two specifically: electrification and breakthrough technologies.

Currently 82 per cent of Canada’s electricity is produced from non-GHG-emitting sources. This represents a potential competitive advantage in a world in which companies are increasingly seeking to de-carbonize the production of manufactured goods. But to achieve our climate objectives, Canada must, at a minimum, double its generating capacity and the infrastructure to deliver it.

We also need to do better when it comes to developing and commercializing innovative, climate-friendly products and services.  The Canadian Institute for Climate Choices estimates that “safe bets” such as electric vehicles, equipment to improve energy-efficiency, and new heating and cooling technologies can contribute at least one-third of the emissions reductions required to meet Canada’s 2050 target. The rest will need to come from “wild card” technologies that are currently underdeveloped or may not yet even exist. The proposed Canada Advanced Research Projects Agency (CARPA) could significantly increase Canada’s capacity for radical innovation, provided it is given a high degree of autonomy, a mission focused on high-risk, high-reward projects, and a clear mandate to do things differently.

In Budget 2021, the federal government earmarked $140 billion in economic stimulus over the next five years. You and your colleagues promised an additional $78 billion in expenditures during the 2021 election campaign. In our view, this level of spending is unwarranted and, indeed, risks doing more harm than good given that most economic indicators point to an economy that is already operating close to full capacity.

Based on the current trajectory, program expenses as a share of GDP will exceed 15 per cent for the foreseeable future, a ratio not seen since the 2008 financial crisis. One can always hope that large deficits will be offset by higher GDP growth, but it is a considerable risk to take on behalf of future generations. Fiscal policy should be used judiciously to enhance Canada’s long-term productive capacity, rather than further stimulating an economy that is already overly dependent on household consumption.

Going forward, a new fiscal anchor is needed to reassure lenders and provide a measure of fiscal discipline inside government. Rather than using a declining debt-to-GDP ratio as its notional fiscal anchor, we recommend that the government adopt one based on debt-servicing costs, bearing in mind that interest rates and debt-servicing costs are expected to rise over the coming years. As proposed by former Bank of Canada Governor David Dodge, the government should ensure that future debt-servicing not exceed 10 per cent of annual government revenues. We also call on the government to undertake a broad-based, systematic review of federal expenditures aimed at saving one to two per cent of program spending on a yearly basis over the current mandate. This would be consistent with the Liberal Party’s commitment in its 2015 election platform to ensuring that federal expenditures are always “fair for Canadians, efficient, and fiscally responsible”.

In closing, let me reiterate our belief that Canadians need and deserve an economic roadmap that inspires optimism for the country’s future. Canada’s business leaders worked closely with you and other policymakers through the pandemic to keep Canadians safe and secure. We are equally committed to collaborating with you now to bring about sustainable, long-term economic growth that benefits individuals and families in all regions and in all walks of life. There is much work ahead, but together we can do it. 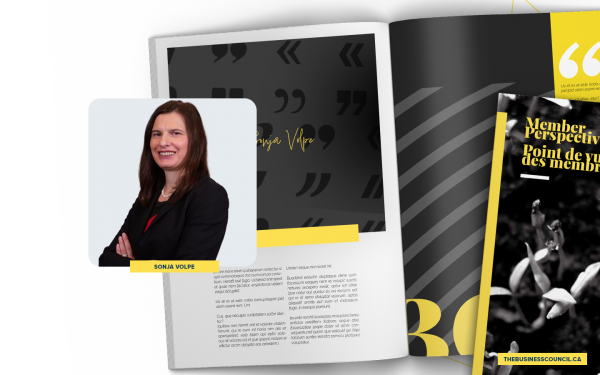 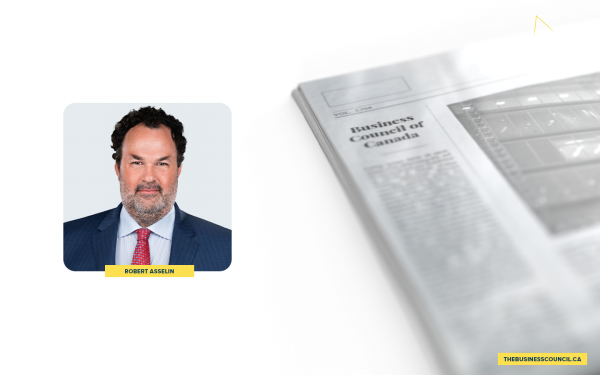