As you and your colleagues draft the 2015-16 federal budget, I write to offer the following observations and recommendations on behalf of the 150 members of the Canadian Council of Chief Executives.

Since the recession ended, Canada has compiled an enviable record of job creation, business investment and GDP growth. Nevertheless, the weak global outlook and depressed commodity prices continue to weigh heavily on the domestic economy. Until these global headwinds abate, Canada will remain vulnerable to new economic shocks.

In this challenging environment, it is vital that the federal government stay focused on balancing its budget and restraining the growth of federal program spending. Canada currently has the lowest net debt-to-GDP ratio in the G-7. Although it is tempting to increase spending as deficits give way to surpluses, we urge the government not to back away from its commitment to reduce the federal debt to 25 per cent of GDP by 2021.

Canada’s economic success depends on a well-educated and skilled labour force. But as the global competition for jobs and investment intensifies, there are signs that our education and training systems are not keeping pace. Research by the Organisation for Economic Cooperation and Development (OECD), for example, points to a significant drop in math and science proficiency among Canadian high-school students compared to their peers in other countries. A separate study found that Canadians between the ages of 16 and 24 rank below the OECD average in numeracy – an alarming result given the importance of science, technology and innovation to our economic future.

In our view, these findings underscore the need for a broad national effort to strengthen Canada’s education and training outcomes. We encourage the federal government to work closely with the provinces and territories, educators, employers and other stakeholders in helping to shape a more cohesive, pan-Canadian education and labour-market strategy. While respecting provincial jurisdiction over education, our country needs to do a better job of introducing children to math and science in the early grades, and of encouraging students to stay with those subjects at the high school level when they are no longer compulsory.

Equally, we urge all levels of government to work together to expand and align our country’s labour market information systems in ways that will help more young people find rewarding careers. The federal government’s newly announced job vacancy and wage surveys are a step in the right direction, but the quality of Canada’s labour market information system still lags behind our OECD peers. We join Polytechnics Canada in calling for an independent, national Labour Market Information Council that would gather and make available data on labour market conditions, job vacancies, wage trends, graduate outcomes, workplace training and employers’ skill needs from across the country.

Canada needs a tax system for the 21st century

Canada’s tax rates and overall business environment have improved significantly over the past decade, but more needs to be done to ensure that our country remains a globally competitive investment destination. Our current tax system is overly complex and imposes high compliance costs on companies and individuals. The World Economic Forum, for one, has consistently listed tax regulations as among the top impediments to doing business in Canada. A recent PwC study found that large Canadian firms are typically subject to more than 50 different kinds of taxes at the federal, provincial and municipal level, spending on average $4.5 million a year each to comply with their Canadian tax obligations.

We urge the federal government to conduct a comprehensive review of the corporate tax system with the goal of streamlining the tax code, reducing the number of preferences and broadening the tax base. One approach, pioneered by the United Kingdom, would be to establish an independent Office of Tax Simplification. Since its creation in 2010, the UK Office of Tax Simplification has conducted detailed reviews of the corporate and personal tax systems with a view to making them more efficient and easier to understand. On the corporate side, one of its top priorities has been to identify credits, exemptions and allowable deductions that could be simplified or repealed to achieve a simpler and less costly tax system.

In our view, tax simplification is as important as bringing down rates, and it deserves to be a central pillar in the next phase of Canada’s efforts to design a tax system for the 21st century.

Trade as a driver of job creation and growth

Although the economy of Canada’s largest customer – the United States – is gaining strength, our country’s ability to benefit from that upswing is limited by unnecessary regulatory differences, discriminatory labelling and procurement practices, and delays at the border. Our association strongly supports efforts to ensure a more efficient and trade-friendly Canada-U.S. border and encourages your government to consider the recommendations put forward in a recent CCCE report, “Made in North America: a new agenda to sharpen our competitive edge.”

At the same time, we urge the government to stay focused on initiatives to diversify Canada’s trade. The Canada-EU Comprehensive Economic and Trade Agreement (CETA) will give Canadian firms of all sizes preferential access to the world’s single largest economy. To address the full scope of CETA opportunities, we recommend the creation of an independent agency that would provide sustained, on-going financial and management support for a broad marketing, business partnership and engagement initiative. In addition, we encourage the government to build on the recent Canada-Korea trade agreement by accelerating efforts to conclude the Trans-Pacific Partnership negotiations as well as bilateral agreements with India and Japan. We further recommend that your government seek a strategic economic partnership with China, setting the stage for a possible future free trade agreement.

Your government’s ambitious trade agenda has bolstered Canada’s ability to compete as an international supply chain hub. In support of this objective, we urge the government to conduct a comprehensive review of Canadian tariffs (as recommended by the Standing Senate Committee on National Finance) and to increase the de minimis threshold for duty-free imports. Eliminating tariffs on goods entering Canada – including in supply-managed sectors – would boost economic growth, attract investment, and provide consumers with more choice and better value. It would also allow Canada’s trade negotiators to focus their efforts on other priorities, such as the need to liberalize the rules surrounding foreign investment and trade in services.

In conclusion, Minister, I and my colleagues thank you for your service to Canada and your commitment to building a stronger and more competitive Canadian economy. If I can be of any assistance, please do not hesitate to let me know. 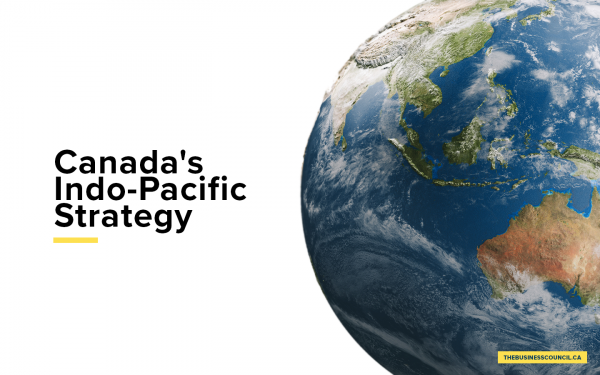